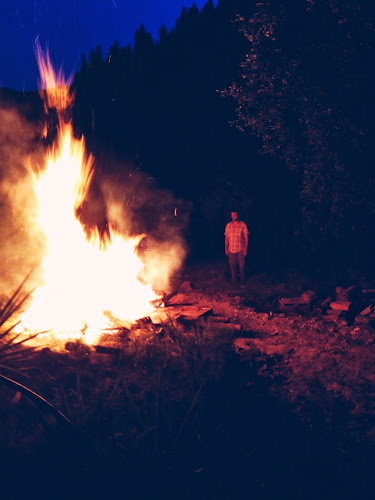 The debris pile is shrinking, day by day, slow but surely.

This is almost reminding me of the wood pile of yesteryear, but this has already had a much more cathartic result.

Somewhere within the hot afternoon we started talking about making a massive fire to take care of the growing pile within the pile now designated as "old wood". Nary a word spoken, only a match lit, a half hour after dinner I smelled the tell tale scent of burning and soon discovered David dwarfed by possibly the biggest manmade flames I have ever seen. Without s'more or stickbread, the hypnotizing trance of the fire held us captivated for hours.

There's another David around here, he'd just returned from being away for a few days. He will be yet another person I meet here who, like me, left a former life for one reason or another only to end up here, however temporarily, and happier. He was a director, well paid, "successful". In his case, life and his health interceded a year ago, taking him to where he is now, just a few minutes down the road. We got to know each other a bit when the shaman was in town but this huge fire gave us several more hours while we volunteered to monitor things, i.e. to make sure the entirety of the property was not engulfed in this (possibly illegal) blaze. We have a lot of immediate similarities, he's a bit older but the common threads are there. We both questioned leaving at the time, feared failure, homelessness, and worse. But weren't we crazy to think that? We are capable, smart, kind people. We are fine and we are going to be fine. As he put it at one point, he could be sitting on a couch in Lisbon watching whatever television program happened to be on, safe and content in the career he built. Or he could be sitting around a huge fire talking to another person and both learning and reaffirming a better approach to living life, however much security it may lack from the outside.

I agreed at the time and today it still feels so true.

So now the question for me is how to maintain having huge bonfires and late night conversations like these, however literal or figurative, for the rest of my life.