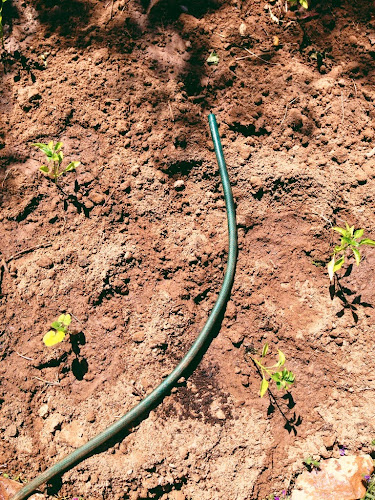 Since I arrived here, my bedtime had been shamelessly on the early side, easily clocking out in the nine or ten o'clock hour, still wanting more sleep as the sounds of the farm stirred me come morning. No sleep was enough sleep, not totally atypical for me, perpetual sleepyhead.

And then a funny thing happened, for various reasons, some if which I was not initially happy about, I recently moved myself from my tiny attic dwelling to a room downstairs full of bunk beds. I rearranged, I readjusted. That night, I slept the most efficient and justified sleep imaginable and woke up so easily in a room full of morning light.

Last night David and I watched a documentary as we so often do. That led to post discussions which took the predictable late night turns for the tangential such that it was nearly 1am by the time I crawled into my tiny bed. As is most often the case here, I set no alarm and hoped for the best. To my surprise, I woke as early as ever, ready to greet the day, once again roused by light and sounds of morning, admittedly so happy to be in this new space. Feng shui? Shaman vibes? Plain ol' sunshine? Don't ask me. But it's a perceptible shift for me and one that I deeply appreciate.

This morning, the day's chores were less clear. Technically we had arrived at a weekend but is there really such a thing? This and that, cleaning here, moving there. The hours passing quickly like they do.

Clara and I had been wanting to move the chicken pen, a task we finally set out to do mid-morning.

In my experience every farm deals with both their chickens and their compost differently. Sometimes, as is the case here, the two elements are combined into one. We save all of our organic waste in a blue bowl next to the sink: fruit peels, food scraps, leftovers. This becomes the chicken's food. When the bowl is full, we take it to the chickens and let them go to town. Some things they don't eat, avocado pits and lemon peels for example, but it doesn't really matter because the real purpose of these chicken beds are to make the most fertile soil imaginable (not to mention the yellowest egg yolks).

Today we decided it was time for a change of scene and for a new planting bed. Easy does it, lifting just a few centimeters off the ground, carry them slowly to a new spot across the other side of the mandala garden. They won't be happy in the interim, but their reward will be another bowl full of our glorious scraps.

Somehow in the short distance between new and old plots, two of them managed to escape. They immediately went crazy on a unsuspecting snail, for the moment ignoring the bounty of strawberries ripening in the mandala. One of the newer helpers here immediately went to chase and capture them, a completely futile effort. We instead decided to continue to carry the pen to its new resting place, crossing our fingers the stray ladies would not venture far. Clara retrieved the blue bowl, took it towards the pen tapping it as she's brilliantly been doing now for weeks, and what do you know, these otherwise seemingly brainless fowl beelined their way back to their enclosure. From there, we set up their new habitat, encircling it with new rocks, giving them fresh water, fresh everything.

Already on a roll, I went ahead and loaded up three wheel barrels full of soil and covered up the remains of the old pen. There the sproutings of three pumpkins, six peppers, and three beet roots found their new home today too.

So maybe the life lesson is obvious here. Creatures of habit that we all are, however flexible we perceive ourselves to be, change can be hard. Uprooting your life, your location, the place where you sleep all create stress. You want avoid it, to run away, to be annoyed at the people who moved you, or maybe worse yet...you just stay put. But maybe if you let it happen, let yourself be carried once in awhile, you'll wake up easily to a room flooded with sunshine, a new and nourishing place to grow and spread new roots ...or a bowl full of scraps, as the case may be. 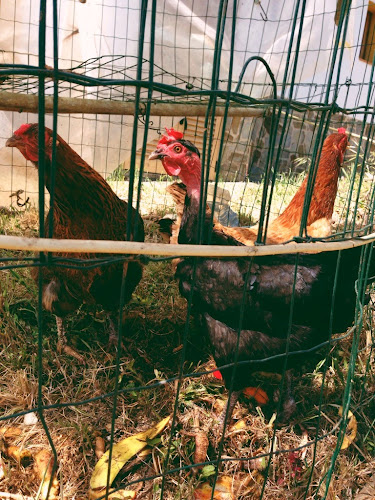