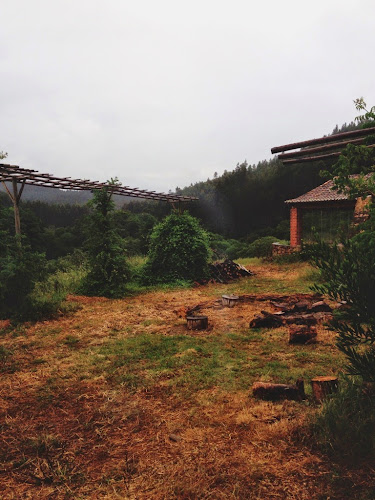 Turns out it can get gloomy as hell here.

Sunny Portugal finally turned its back on me today and apparently we are splitsville for days to come.

I went to sleep early but woke up in a gloom rivaling the skies outside my windows. Plagued by strange dreams involving rats on my bedspread (or was it really a ghost?!), I slept terribly and I'll blame it in two parts on the weather and the culinary entitlement I felt following the beach.

Try as I might, I never rallied today. Everyone was in slow motion it seemed, two of us actually sick. Breakfast was late, then lunch, then dinner. I existed in a brain fog throughout, seeking shelter repeatedly to my room when the rains would pour their hardest, twice caught in a freezing cold deluge when I made feeble attempts to be productive.

Adrien and I did manage to accomplish yet one more step towards getting the electricity on in Nubia's School. This involved riding backseat on an ATV (something we all know I legitimately love!), redirecting endless cable down a rocky brambly hill, eventually lassoing a rope and a rock across the canal so as to be able to shimmy the box across without it getting wet. I cried with laughter throughout most of this ridiculous joint task, soon thwarted however by the wire's very essential "submarine" (chemically bound bond between two joined cables) not fitting through the pipe we had planned for it running under the road. Nevertheless it was a momentary bright spot in the day.

Other than uprighting a young palm tree and attempting to launder some towels that now hang soaking in the rain, I can only recall that I stood or laid around listless.

Can't win em all. Or, as will be my plan, if you can't beat em, join em. I'll go to sleep expecting the worst (including the rat/ghost!) and if rest, a few minutes of sunshine, or some sort of indoor productivity can greet me tomorrow instead I'll be thankful.