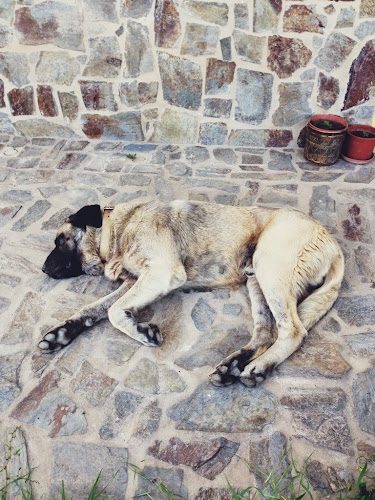 We knew it was just a matter of time before I began to introduce you to my animal friends. Here lies Jiva, the night watchman. When I arrived here he had not been seen in weeks. It was presumed he'd either found a lady friend far away or maybe encountered some sort of peril or worse. Two mornings ago he was just... back. By night, vigilant guard is kept over the perimeter. By day... take to the shade and look to be on death's door. He's taken admittedly instant like to me. It didn't take much, an ear scratch literally. The other night I was walking along the aqueduct nearby and heard his deep, guttural bark. I made some noise that stopped him momentarily, but as soon as I rounded the bend he started up again. When I finally returned, he was passed out in the driveway. I worried for a moment he might be mistaking me for an intruder and playing possum, we'd only just met the day before. But a few steps passed him, I got a tender head but on my side, looking for the aforementioned scratch service. The owners of this place told me that one day he just showed up here, took to liking it, and now protects it. What a man.