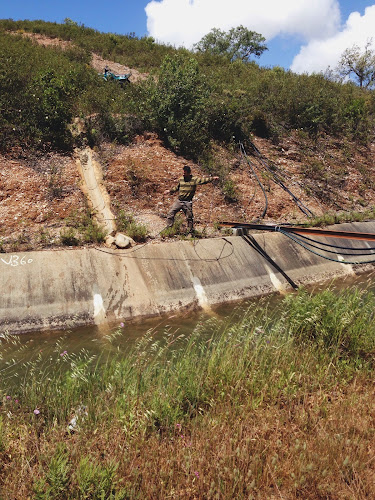 And in the morning, the rain continued....

Storms with breaks of surreal sunshine followed by more storms and supposedly even hail. I stood repeatedly in the doorway of what we call the canteen and watched rain that seemed to be falling in two heavy directions simiultaneously. Buckets and flowerpots full to the brim, soil and rock washed away within minute, projects left mid task fully compromised. I ask you how can one of the driest places I have ever come to know could be capable of this level of precipitation? And for it to be so cold outside! The Dutch man staying here for the week informed me that, for the record, Portugal is known to be "cold land, hot sun". Short and sweet but, trust me, totally accurate.

Sun would in fact intermittantly greet us only to run away again and, for the second day in a row, fool me into thinking productivity could be mine for an extended length of time.

David and I ventured out after lunch for yet another chapter of the now-endless saga of Getting Electricity to Nubia's School. I can't and won't even begin to describe the specifics and endless meters of heavy cable involved in this task, nor do I feel I fully understand the McGuyver-like shenanigans entailed, but suffice to say I have touched and grappled and hauled every inch of it, through rock, flora, canal, and stream. Literally in circles and tangles and everything else, only to (literally) do it again the next day. But we finally got all of it to our side of the canal. And I will acknowledge that I also benefitted from another hilarious installment of a lasso technique being implemented in order to do so with, once again, predictable laughter to the point of tears.

Even with the sun out, the wind blew and reddened my cheeks and the rain would come and go and spit and spat and let us know it still ruled the day. We postponed tomorrow's wood delivery, we ate two bowls of soup instead of one. Rain. It's so real here. An apparently this is just a (literally) cold, hard glimpse as to what winter would be like, really just a hint of, because in winter it never stops.

But, easy does it, it was admittedly cozy going to sleep in the new chill, sort of nice to take it easier in the morning with perfect excuse. We ended up getting the cable over the canal, I like to think my arm strength is almost bordering (relative) remarkability. We got plenty done in spite of the elements, we had enough energy for another documentary and then some. Eventually we know the sun will return to its dehydrating, plant scorching, sometimes flesh burning glory. We might even miss these gloomy days. Just like we might, one of these days, actually get the lights on at Nubia's School.