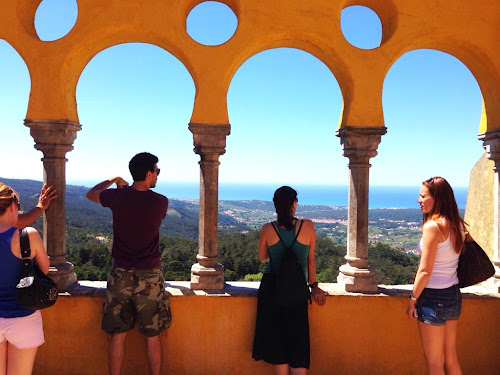 About an hour by train outside of Lisbon, it's the stuff of dreams and, arguably, part if my initial inspiration for coming to this area in the first place. As it turns out, I could have spent awhile - days! - in this city and stayed fully occupied. If you know me at all, you know I love an old town and a monumento. Trust me when I tell you that after hours upon hours walking I had barely just begun in strange and wonderful Sintra, in spite legwork devoted to the cause. With that said: what a day.

Palacio de Pena and Quinta de Regaleira got most of my attention and, in a word: wow. How about you rustle up some renaissance architecture, throw in some mysticism, add some water features, and give yours truly a call? Perfection.

Let's start with the Palacio de Pena - except where do I begin? If you, like me, take issue with paying good money for transportation when you could just as easily walk, take note: ready yourself. Where in any documentation is it shared that we are talking an uphill battle in excess of hours? Not that I'm complaining, I'm really not. This cobbled road stroll immersed me fully in the wild world of Sintra. Once a getaway for the rich and famous, the voyeur in me was able ogle the luxurious quintas while soaking up the vibrations of the massive scale arboretum courtesy of King Ferdinand II's genius. I don't think I've ever experienced anything like this: thousands upon hectares of plant species not natively known to Portugal not to mention not known to cohabitate. It was as beautiful as it was mind blowing.

The Palacio itself is a drop in the bucket of the larger land mass encompassing the Parque. I entered this building with trepidation; the crowds of tourists were, as predicted, no joke. Everyone was corralled here and there through atelier and toilet, illuminating to me, among other things, tourism in the dawn of iPad as camera. Typically tolerant, I found myself claustrophobic more than once. It was hot, it was contained, people were loud, but, guess what: it was beautiful. To imagine oneself as royalty existing ing within these walls is the stuff of dreams. The tile work, the trompe l'oeil walls, the carvings, the view! Minimalist that I can be, I was sold.

Back outside, I wandered to and fro through non-natives, pathways, and lagos, finally extracting myself, ready to head downhill. I will spare you the details but the roadside short cut I created for myself was questionable at best. But no matter, I made it back into Sintra Historico in a fraction of the time, ready to tackle the next item of touristic business: Quinta de Regaleira.

Were there a blog presence in either the world or for me personally when, years ago, I explored Las Pozas in Xilitla, Mexico you can be sure I would link to it. The fact is, there wasn't. I bring it up to stress the first time my mind was completely blown by architecture with seemingly limitless financial backing resulting it what could be described as a surrealist's fairy tale slash wet dream. I am here to tell you, I have stumbled upon such a thing for the second time.

Again, as I understand it, Sintra at some point became an upstate getaway of sorts. Enter Carvalho Monteira. He lived the dream, he hired an architect, the result if which is wonderful, mysterious Quinta de Regaleira.

You've got your palace, your chapel, your, fountain, your tennis court. But what may come as a surprise to the casual visitor is the network of secret trails and underground secret tunnels you also built, all eventually linking to, among other things, an "Initiation Well", a 27 meters deep subterranean tower with its "esoteric and alchemical associations" is meant to make you intensely feel the relation of heaven and earth. And then there's the series of sometimes elaborate grottoes, all with particular themes, that you decided, seemingly with a sense of whimsy, to sprinkle about the perimeter. I could go on.

Let's face it: I was DAZZLED. I'd been walking for (literally) seven hours at this point and it was all I could do not to take that secret staircase to god knows where and end up on the other side. Twice I felt real fear: first while descending into the depths at the afore mentioned well and second within the otherwise unassuming but truly terrifying - and true to its name - Labrynthic Grotto. Here is where I stop once again to marvel at all other countries besides the US and their sense of social responsibility. You wanna venture up a set of stairs that lead to a tunnel without illumination and god only knows what creep or undead lurking within its chasms? Hey, go for it. Same if you're elderly but just emerged from said tunnel only to discover a lily pad-like set of stones to skip over in order to return to land, lest you fall into the murky lagoon. Enjoy!

Anyway, I love this sort of thing and I tip my hat to the creative genius who conceived of it (here's looking at you, Luigi Manini).

Back in the relative safety of the center of Sintra, I devoted still more time to its winding streets. Finally these legs could take no more and I made my way to the train. As is now typical, I dozed off completely, eventually landing in the Rossio again, within this wonderful familiar city I am almost boastfully becoming familiar with.

And then I couldn't help it. I'd gone to that terrace for two nights in a row, let's make it a third. Beer in hand, bowl of olives, perfect pink sunset. Cheers Lima. It's really been something. 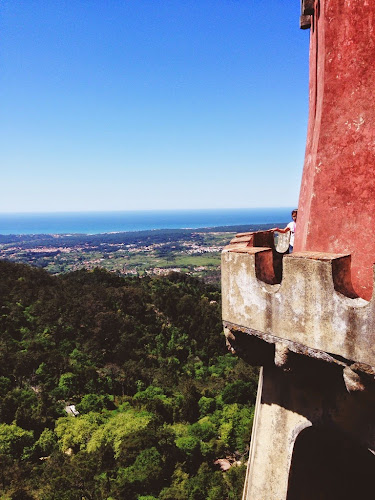 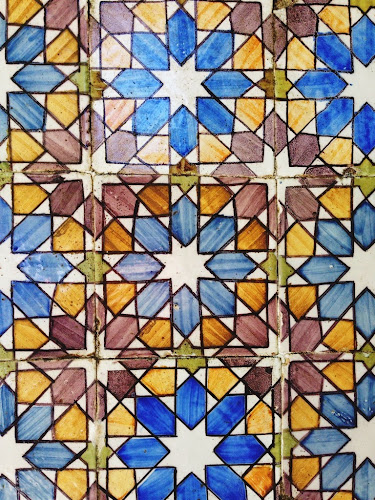 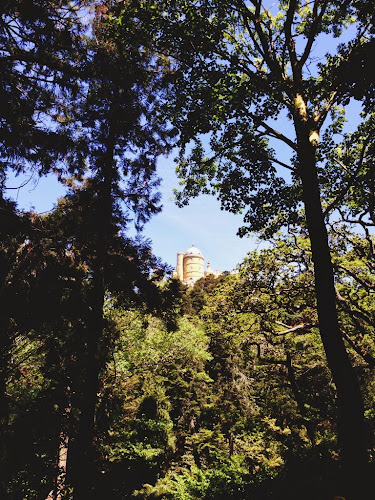 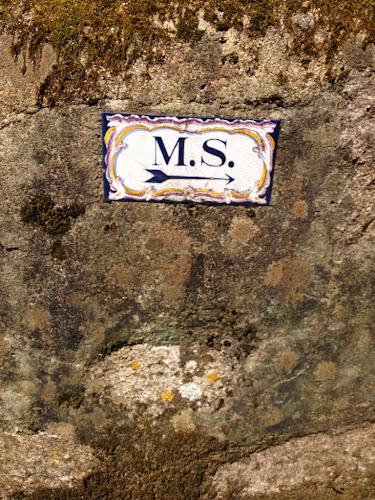 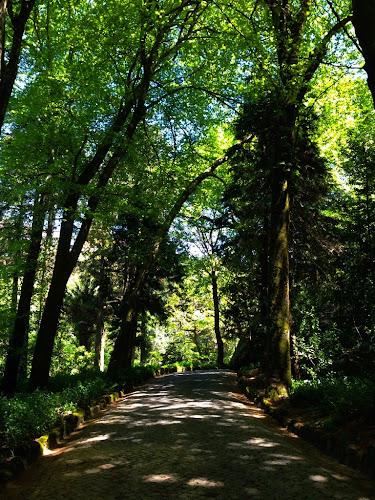 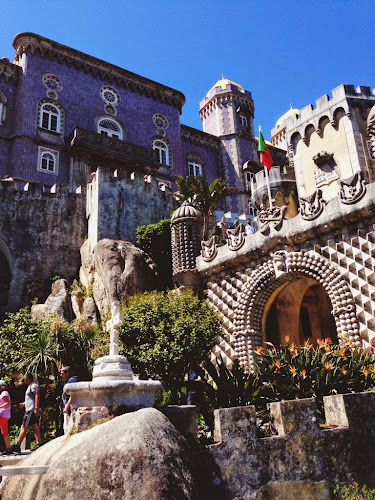 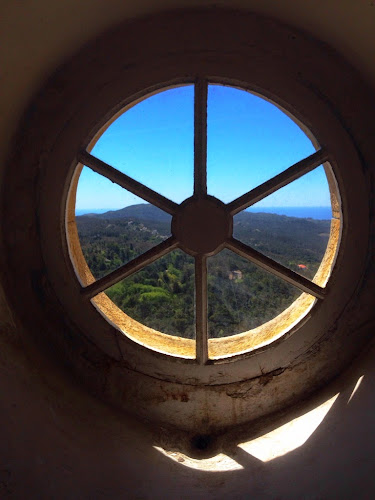 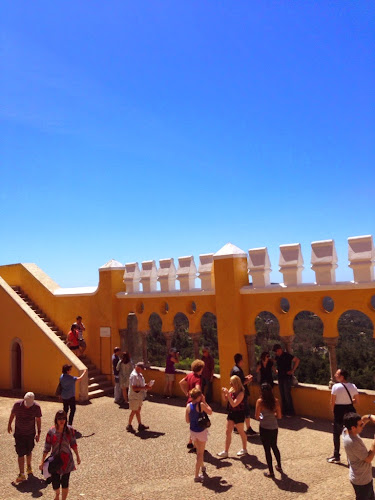 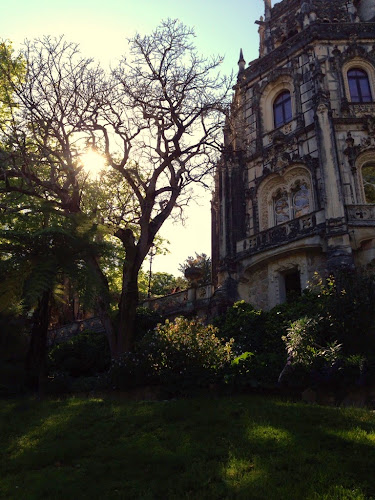 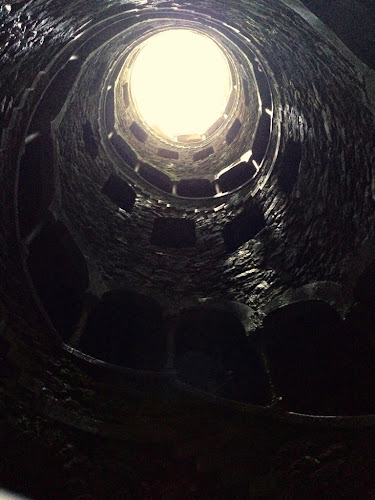