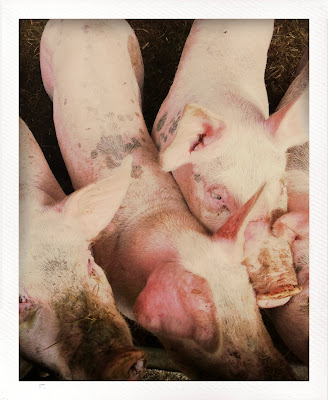 You may not be aware of this, but there are fifteen chickens, one rooster, and four fattening pigs in my charge as of late. Each morning I open the door to the chicken coop, distribute feed and inspire egg production. The rooster always crows loudly in my face the minute I walk in. They will stay behind the interior gate for another few hours until their egg deeds are done. The pigs will meanwhile get boiled potatoes, feed, water, and whey leftover from cheese making. Noontime is egg collecting and the chickens' release. The rooster will again crow the minute he is let out into the world. They will collectively stampede to claim any remains from the bird feeder and will then sprawl gracefully in the dusty patch by the porch. The pigs squeal and holler and pile all over eachother all day long. If we happen to be weeding or if the grass is mown, they'll have a bonus snack and chaos will ensue. In the evenings, just before cow milking, a repeat of the food is given for all. Usually the chickens could care less. The pigs will act as if they have never been fed before. Sometimes they fight and Sally barks at them from across the fence to keep them in line. Circa 10pm is usually bedtime for the chickens, typically after they have already assembled themselves in their hut for the night, and this time will gradually get earlier as the days continue to shorten. In the short time I have been here, this gang has gotten to know my tread and associate me with all the good things in life. It's definitely not rocket science, but it's one of the best jobs I have ever had.