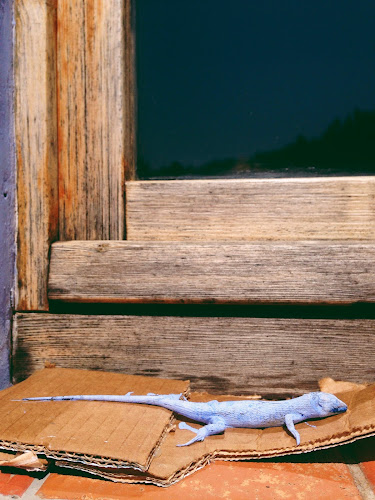 I have been holding onto a deep desire to complete the blue refresh around the windows of the temple for months now, the same treatment I gave the windows of the big house prior to the shaman's visit in May. It takes some doing: newly cooked whitewash, new pigment, the perfect blend, the surfaces shaded. If any of the above go wrong, it's going to look terrible. And terrible is not an option.

Finally, FINALLY, it all came together yesterday. David and I mixed it all slowly and then did a tiny patch test just before Clara rang the bell for lunch. I returned to the bucket roughly an hour later, ladder in hand, about to give it a stir but first went to extract what I think is a leaf blown in by the wind. Nope. It's a lizard. A suicidal lizard. I can only imagine he must have felt as dazzled as I do by this perfect shade of blue. Curiosity drew him close only to overtake and without warning.... a beautiful blue death.

Our friend Joao happened to arrive right around then, looking happier than hell I might add. He's been particularly inspired since the shaman came, he said, he was in fact bringing a trash bin he'd fashioned out of cork the night before as a gift to David and Ju. I thought he might appreciate this poor blue soul I'd just discovered. He sure did, and among other things he said it might be my spirit animal. "But it's dead?!" I said and he very calmly replies "...but death is positive, ok?" as if this were the most obvious thing in the world.

I have to admit there is something so heartbreakingly beautiful about this creature, not only just his death, but now the aftermath. I laid him on a piece of cardboard where he currently lies, in one of the tiny, freshly painted blue windows. No one seems to mind, and no one seems to know what else to do with him. So for now: may he rest in eternal blue peace.