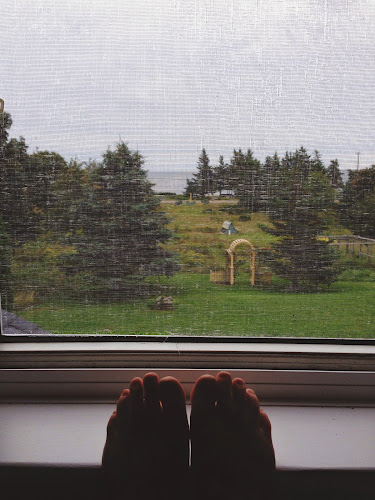 I woke up in Canada for the third time since landing here days ago.

After London, after the ultimate friend reunite, after celebrating a wedding, after wondering if London was more charming than I ever gave it credit for, after drinking cider, after dropping my iPhone into a toilet I didn't even use, after taking a deep breath and feeling like my vision quest was over, after the confusion of saying goodbye to people I had only just said hello to, after getting on a plane and embarking on a semi circuitous route as part of a ultimately fourteen hour plus travel day, after finally landing somewhere ....familiar.

Enter the deep, dark jet lag. Or is it more life lag all over again? I realized I haven't really stopped with a forever go go go since that final beautiful beach day weeks and weeks ago. Time change, life change, exhaustion.

This morning I am waking up again, but just barely. Another nine plus hour sleep after a day that included a two hour nap. Still feeling wonky eyed; nearing full energy but not even close. This is the third day of gloomy skies, a reality I have never known here in this maritime utopia. There's a certain relief in the weather dictating a lack of pressure to get outside and be productive or, at the very least, leisurely. Laziest me is just waiting for the sunshine to give me the jolt I think I need in order to reacclimate to this time zone, to routines, to inch closer to real life. Wondering all the while if this is another cosmic life lesson forcing me to overcome the would-be givens in order to arrive stronger on the other side.

In the meantime, patience. And another cup of coffee.