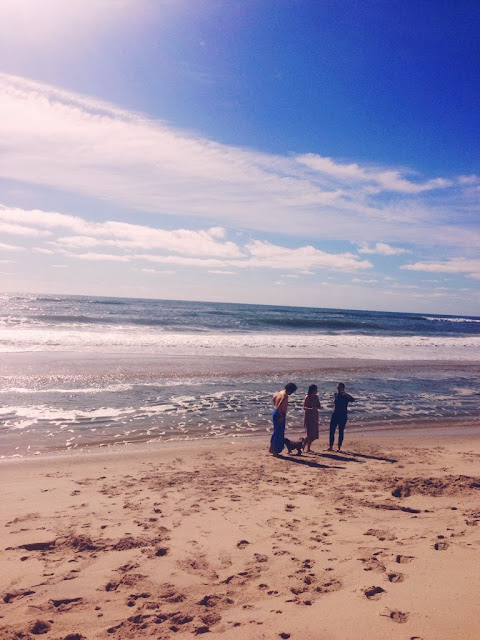 We headed out Sunday to Quogue, a long holiday weekend that I hadn't planned beyond a party I hosted in Brooklyn on Saturday night.
We brined the pork loin in the leftover bourbon-spiked cider. We roasted three colors of cauliflower and made a crumble for dessert. The dinner table was full, as were our wine glasses. Our friend Evan was telling us how he'd gone into the ocean one last time the day before, how he'd tempted fate. There had been a big storm so the waves were extremely powerful, moreso than expected, he said. He claimed he had maybe been in over his head, maybe shouldn't have done it.  But if the weather held for the following day, he'd do it again, we all should. I hadn't packed my bathing suit, but at the mention of the ocean I knew I could be easily be talked into it.

The next morning we rallied for the beach. We made it out early in spite of our late night and bleary-eyed state. It was mid October but the sun was shining bright and it felt surprisingly warm. Evan, already in his swim shorts, poured me coffee from his thermos into a mason jar - silly and charming details that made this already beautiful morning all the more magical. Andrew and I decided there was no way we could resist: we needed to get into the water. We quickly went back to the house to dig out leftover bathing suits for each of us, rushing back so that we could all jump in together.

I hadn't realized there had been a storm that week until Evan mentioned it the night before, but it was obvious something strange had happened to the shore. The water came up further than I'd ever seen it and a sand bar had formed a few yards out. You would have to wade through waist deep water before reaching the sand and then you had to dig yourself back out. This sand was like nothing I had never encountered before, something similar to deep snow. It was hard to leverage your weight on, hard to pull yourself up through and over. And the water was freezing. As I crossed the sandbar my feet sank in deep. I didn't know whether to go slow or fast. Fast to keep from sinking, slow to keep from breaking or twisting an ankle or knee. We were all laughing and trying to move as quick as we were able to, bracing ourselves, trying to make it through.

At first, the breaking waves seemed relatively calm. We screamed and recoiled against the frigid water but kept wading further in. Evan yelled that we had to dive in all the way at least once before returning to shore. No turning back, we said, we'd made it this far. At just that moment a large wave came towards us and we all dove in. I ended up farther out than everyone else, I turned towards Evan briefly before turning around again and seeing what was literally the biggest wave I had ever confronted in my life.
I had no leverage. I was neither swimming nor standing such that I could gain the momentum I needed to dive beyond and through this wave. I had no time to panic or retreat, I could only just postition myself as best I could to dive through.
I remember Evan yelling "DIVE! YOU HAVE TO DIVE!" before was under water. Time seemed to pass in the way people often describe moments of emergency: in slow motion; seconds creeping by like minutes or hours . Like when you fast-forward through a film, frame by frame. Fuzzy, halted, fragmented. I dove through, I was horizontal. And then I was flipped, a somersault, a backbend. Strange visions of my body as a popsicle stick being flipped around unnaturally in the water. I was suddenly on my back. I felt the sand the the broken shells churning on underneath me. I thought to myself, "be loose, be easy" and did my best to surrender to the force of this way. I had time to feel fear and think "please don't break your neck, please don't break your neck", to think about that haunting New Yorker article from awhile back. I let the wave drag me. My arms and legs flailed and my body spun. At some point I was twisted around again completely, now on my stomach, and suddenly my feet and body and brain knew which what way was up, what to do. Suddenly I was out of the water, my head, my shoulders. Inexplicably I was standing, literally standing upright, completely bewildered. Evan immediately yelled out, cheering. He rushed towards me with a high five. Andrew high fived me too but I could detect something else in his eyes, maybe he could see something similar in mine. I said very little but tried to laugh, tried to appear confident. And then I hustled as quickly as possible out of the water. Back to the sand bar, awkwardly down, waist deep, up again. I had been dragged so far out, so far away from where I started. I coughed up salt water, it poured out my nostrils. My heart was beating so hard I could hear it above the sound of the crashing waves. I was so cold. I felt shaky and stiff. I secretly felt I had just cheated something, had just let myself come too close.
I toweled off, I sat down. My heart slowed, my breathing returned to normal. Everyone was back on shore, we were all fine, we were all invigorated. It was "just what we needed" it was "such a beautiful day". "Indian summer!", we said, "one last time".

I confessed to Andrew before we got back to the car that the entire ordeal had actually been terrifying for me, I still felt shaken. He said he knew. He said he looked for me, scanning the water, waiting for me to pop up. He had time to think I might not, had time to keep looking, was bracing himself for the possibility that he may need to find me. He said I shouldn't have worried, they would have grabbed me. But I know I would have been too far away. Had any law of physics played out against me, it would have made me impossible to find, impossible to grab.The cliche of forgetting the force of nature in the midst of an otherwise low risk moment or decision that changes things forever.

But that hadn't happened.
So I felt invigorated. I felt glad to have greeted the sea one last time. But I continue to remember it too as the time I felt lucky, the time it came too close. Mother Nature, the Atlantic Ocean, at her most forceful and furious. Reminding me of her strength, of the respect she demands. Reminding me that we're alive and lucky to be here. On this beautiful day. For one last time.

And as corny as it sounds, it also reminds me to let go. To surrender. To be loose, easy, to trust. To be grateful to emerge on the other side when you do, to have good friends to tell you they would have helped you if you needed them to.

So I'm thankful for that strange day, that strange morning in the sea. I'm sure it will be months before I meet her again, before I test the limitations of her strength and remind myself of the power and beauty of life that I just can't get enough of, even when it terrifies me. One last time.
at 10:02:00 AM